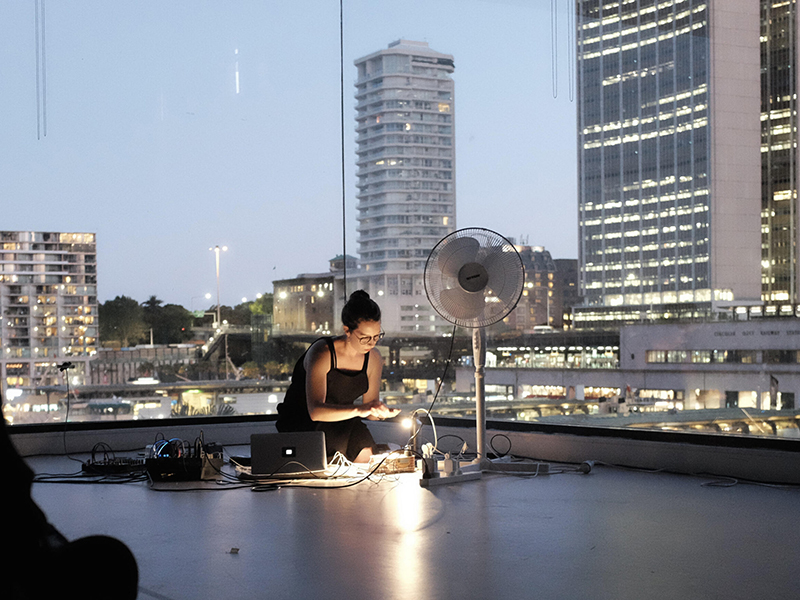 Attune your senses to Earth’s upper atmosphere in a sonic performance by Alexandra Spence, and light installation by Elia Bosshard.

When a satellite is disposed of, it is sent either upwards, into the ‘graveyard orbit’ in Earth’s upper atmosphere, or downward, burning up upon its descent or sinking into a spacecraft cemetery in the nether regions of the Pacific Ocean. Fascinated and appalled by these practices, Alexandra Spence will present a new quadrophonic sound work exploring Earth’s material relationship with space, and the historic connections between electroacoustic music and our perception of space.The performance will be inspired by sonified space data, and composed of Spence’s own recordings of the Ionosphere (using a VLF receiver*), analogue synthesisers, amplified objects and magnetic tape manipulations.

*VLF receivers pick up the electromagnetic impulses generated by lightning storms in Earth’s atmosphere and the Sun’s solar wind interacting with the Magnetosphere.

The accompanying light-installation, created by artist Elia Bosshard, considers the moment of impact – when we become aware of how careless human action can have destructive consequences on our world.

Alexandra Spence is a sound artist and musician living on unceded Wangal land in Sydney, Australia. Through her practice Alex attempts to reimagine the intricate relationships between the listener, the object, and the surrounding environment as a kind of communion or conversation. Her aesthetic favours field recordings, analogue technologies and object interventions. Alex has presented her art and music in Australia, Asia, Europe, and North America including the Vancouver Art Gallery; BBC Radio; Ausland, Berlin; Radiophrenia, Glasgow; Museo Reina Sofia, Madrid; Sound Forms Festival, Hong Kong; MONO, Brisbane; The Substation, Melbourne; Soft Centre, and Liveworks Festival, with Liquid Architecture, Sydney. She has released her music with labels Room40, Long Form Editions, More Mars (w. MP Hopkins), Canti Magnetici, and has a forthcoming release with Mappa. (She holds the belief that electricity might actually be magic).
Elia Bosshard is an installation/visual artist, and scenographer whose work centres around the construction of material and mental spaces, encompassing site-specific installation, sculptural scale models, drawing and writing. In her practice, she draws on socio-political and phenomenological aspects of space to express the felt, but often unseen, relationships we have with space/place in daily life.​ Elia studied Design for Performance at the National Institute for Dramatic Arts and holds a BMus (University of New South Wales) with Honours (Australian National University). Since 2015 she has worked across theatre, dance, music and opera with credits including Deutsche Oper Berlin, Sydney Festival with Axis, Vertical Field at Resonant Bodies Festival, Restraint(s) with artist Ken Unsworth and the Australian Dance Artists, Now Now Festival, Ensemble Offspring, Backstage Music, Belvoir St Theatre 25A, Griffin Theatre, Hayes Theatre, Redline Productions, Kings Cross Theatre, NIDA, Alaska Projects, Periscope Productions, and Sydney/Melbourne Fringe Festivals.

THIS PROJECT IS SUPPORTED BY THE NSW GOVERNMENT THROUGH CREATE NSW.